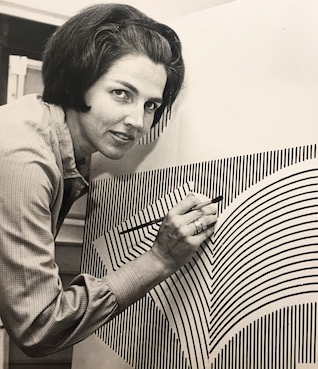 Born in Cleveland, Ohio (1926), of European parents, Olga Dueñas was raised in a musical environment. Her instrument was the piano and she accompanied her brother, a concert violinist, in many recitals. Her father, a professional harpist, and her mother, of a family of fashion designers in Budapest, Hungary, favored their daughter's preference for the visual arts. Her advanced studies in art were at the Ozenfant School of Fine Arts under the personal direction of Amédée Ozenfant, french painter and author who, with Le Corbusier, created the School of Purism in Modern Art.

Olga found in abstract art the visual equivalent of music. At the beginning it was geometrical abstraction that dominated her art, then constructivism, followed by periods of more spontaneuos work, but the precision and harmony of classical music and geometric abstraction kept luring her back, and now she dedicates all her time to kinetic painting.

Olga Duenas lived for more than 25 years in Ecuador, where she married and had two sons. Her many Ecuadorian exhibits include representing Ecuador with 14 paintings in the XVI Biennale of Sao Paulo, Brazil. The paintings were then shown in Europe; Rome, Bonn, Amsterdam and The Hague.

Residency for five years in Caracas, Venezuela and later in Puerto Rico led her to research and experiments that resulted in her first show of 30 kinetic paintings at the Museum of the University of Puerto Rico in 1968. In 1970 she introduced kinetic painting in Ecuador with an exhibit of her work at the “Casa de la Cultura” in Quito. This was the first time kinetic painting was shown in Ecuador.

She now resides and works in Florida, USA. Her recent individual shows, all kinetic, were in Miami, Fl in 2017 and Quito, Ecuador in 2018.